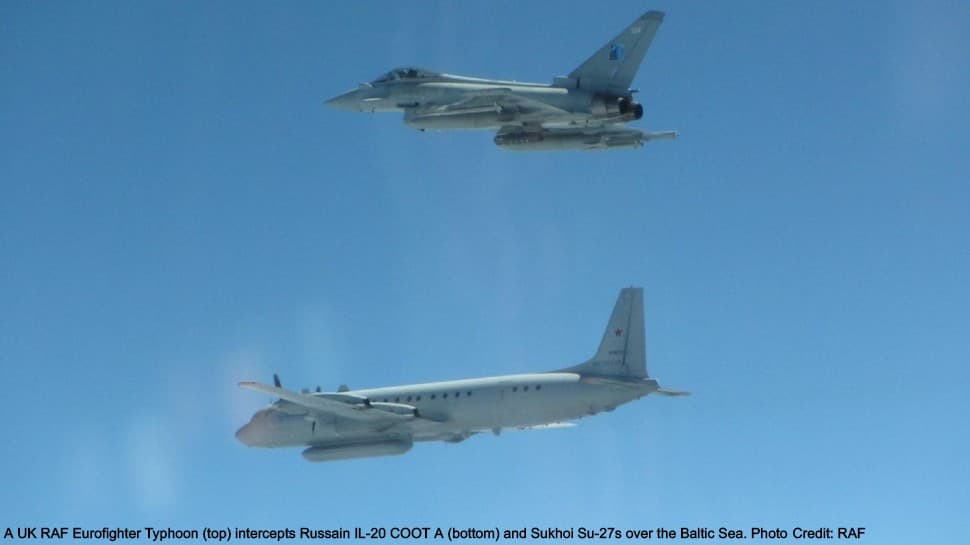 Eurofighter Typhoon fighters of the United Kingdom’s 6 Squadron intercepted a group of Russian warplanes over the Baltic Sea on Thursday (June 4, 2020). Russian Ilyushin IL-20 COOT A intelligence, surveillance and reconnaissance (ISR) aircraft and two Sukhoi Su-27 combat jets flying over the Baltic Sea faced the Eurofighter Typhoons which had been launched from a military base as part of the North Atlantic Treaty Organisation (NATO) Air Policing mission.

According to the UK Royal Air Force, the Typhoons based at Lithuania’s Siauliai Air Base were tasked with intercepting the Ilyushin IL-20 and Sukhoi Su-27s after the Russian plans were tracked approaching the NATO airspace. Thursday’s aerial hide and seek between the Russians warplanes and NATO jets was the second over the Baltic region within 48 hours.

“The Typhoons launched on the afternoon of 4th Jun 2020 to intercept a Russian Ilyushin IL-20 COOT A and two Russian Su-27 Flanker B aircraft operating over the Baltic Sea. This was the detachment’s second launch in support of Baltic Air Policing within a 48hr window,” stated the RAF press release on Friday (June 5, 2020). The force also posted a 42-second long video of the intercept on its Twitter handle.

RAF Typhoons deployed to Lithuania to support the @NATO Baltic Air Policing mission have intercepted Russian aircraft off the Baltic coast for the second time in 48 hours.

This time, a Russian Il-20 Coot A and two Russian Su-27 Flanker B aircraft over the Baltic Sea.#WeAreNATO pic.twitter.com/XISiYxXyMU

One of the Eurofighter Typhoons of the 6 Squadron, attached to 135 Expeditionary Air Wing, was in the air when it was scrambled for the intercept. “This mission was more complex, as there were more aircraft to manage of different types and flying at different speeds. We are always ready to react in support of the NATO mission,” confirmed the Typhoon pilot on Quick Reaction Alert duty when the scramble was called.

Major James Stephen Heappey (retired), the UK Minister for Armed Forces and a former Army officer, asserted that his forces were committed to their duty. “The UK’s commitment to NATO is as strong as ever. Our Typhoon Force is playing a key part in support of the alliance’s air policing operations and our friends in Lithuania.”

Air Vice Marshal Ian Duguid, the Air Officer Commanding 11 Group, asserted that such intercepts by his pilots remain a routine activity. “Today saw the second RAF intercept of Russian aircraft over the Baltic. This remains routine activity, however, it must be stressed that the RAF as part of NATO are conducting these activities to ensure that all flights are conducted within internationally accepted aviation rules. When this does not happen NATO will intercept and investigate. I congratulate all of our deployed personnel in Lithuania for the professional way that they are conducting the mission in conjunction with our Lithuanian and Spanish Allies, they bring great credit to the service.”

An RAF Typhoon was also scrambled on June 2, 2020, to intercept a Russian IL-20 COOT aircraft over the Baltic Sea. “The scramble was called to intercept a Russian IL-20 COOT ISR aircraft. The initial scramble was a real shot of adrenaline, but once airborne it was important to remain calm and professional and make the intercept as expeditious as possible to ensure we maintained both the safety and integrity of NATO airspace. This is what all of our training is designed to prepare us for. However, at the end of the day it’s just my job,” the pilot who intercepted the Russian plane said.