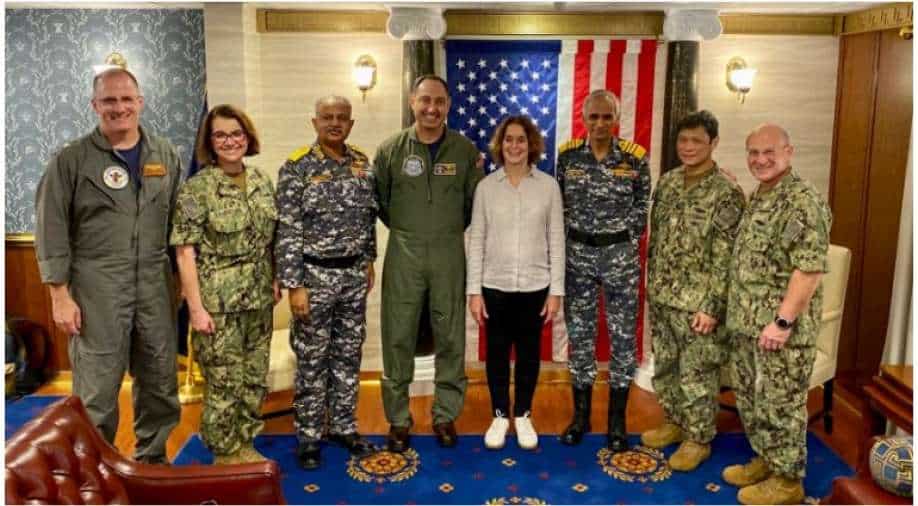 The Nimitz-class aircraft carrier is part of the deployment by the US Navy in the second phase of the ongoing Malabar exercise featuring the navies of all four Quad countries — India, the US, Australia and Japan.

“The visit to the aircraft carrier, which included Chief of Naval Staff Admiral Karambir Singh and Vice Admiral A B Singh, Commander in Chief, Eastern Naval Command, took place during the second phase of the exercise off the coast of India,” the US Navy said in a statement.

Admiral Gilday is on a five-day visit to India from October 11 to 15.

“This visit to Carl Vinson during Malabar was an important opportunity to see first-hand the integration between our two navies at-sea,” Admiral Gilday said.

“By our navies continuing to exercise together, as we are doing right now alongside Japanese and Australian naval forces, there is no doubt our partnership will only continue to grow. Cooperation, when applied with naval power, promotes freedom and peace, and prevents coercion, intimidation and aggression,” he added.

“Exercise Malabar is a showcase example of defense collaboration between our four partnering countries, demonstrating what we can accomplish when we work together to advance our common interests in the Indo-Pacific,” she said.

“We stand committed to ensure peace, security, and economic prosperity in the region and beyond,” she added.

Rear Admiral Dan Martin, Commander of Carrier Strike Group 1, said he was honored to host the visitors aboard Carl Vinson.

“We value the bonds and personal relationships we have developed during exercise Malabar,? said Martin.

The Malabar exercise started in 1992 as a bilateral drill between the Indian Navy and the US Navy in the Indian Ocean. Japan became a permanent member of the exercise in 2015.

India to store its crude oil in US’ strategic petroleum reserves Khalilzad in Delhi: India, US agree that Afghan peace process should lead to political roadmap, ceasefire

India trumps China, US with over 25 billion digital transactions in 2020

The summer of diplomacy has begun for India?

India walking on a diplomatic tightrope?

US envoy Kerry says India is ‘getting job done’ on climate