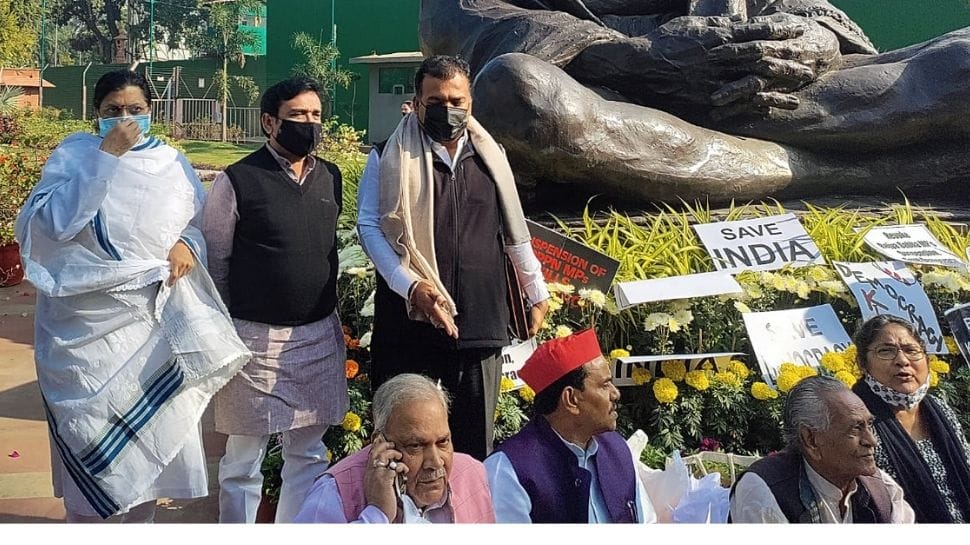 New Delhi: Uproar over the suspension of 12 MPs from Rajya Sabha for ‘unruly conduct’ on the last day of the monsoon session of parliament continues as Opposition MPs gear up for a sit-in protest in front of the Gandhi statue in Parliament premises today (December 8). Apart from this, Congress president Sonia Gandhi will address a meeting of Congress parliamentary party in the Central Hall of the Parliament today.

The MPs were suspended last week. Holding the government responsible for the deadlock in Rajya Sabha, opposition members on Tuesday said they will continue their joint protest against the suspension of 12 MPs till the time it is revoked. The Upper House did not transact any significant business for the second consecutive day as opposition parties kept up their protest, demanding the revocation of the action against the MPs.

The government, however, insisted that the suspended MPs will have to first apologise for the unruly conduct in the House. Addressing reporters outside Parliament, Leader of Opposition in Rajya Sabha Mallikarjun Kharge alleged that the suspension is against the rules and undemocratic. He said they will continue to protest in support of the suspended members and sit on a dharna with them. The Congress leader also urged Lok Sabha members to join the sit-in.

“The government is fully responsible for the deadlock in Rajya Sabha. We have been meeting the chairman and the government and have stressed that they cannot suspend members like this. They have wrongly and undemocratically suspended 12 MPs for what has happened during the previous Monsoon session,” he said.

Kharge said they have to first name each member separately and tell why each of them has been suspended and only then can the suspension take place and “that too should have happened on August 11”. “When the House is prorogued, the government has no right to suspend the members anymore for the previous session. Their action of suspension is neither as per rules nor as per the Constitution. It seems the government’s intention is clear of not allowing the House to function. Until their suspension is revoked, our fight will continue,” Kharge said.

DMK leader Tiruchi Siva also questioned the action against the MPs. “This is totally undemocratic and rules of procedure have not been followed and it is against the Constitution. So, revoke the suspensions. Whenever the government goes out of their way to fulfil their agenda, opposition members resort to disruption, which is part and parcel of democracy,” Siva said.

He alleged parliamentary democracy “is suffering and is in peril and dignity of members is very much in danger”. “We are fighting to uphold democracy and rights of members in Rajya Sabha. Only revocation of members can bring normalcy,” Siva said.

As opposition members continued to protest, Parliamentary Affairs Minister Pralhad Joshi said in Rajya Sabha that treasury benches would also like the suspended MPs to participate in the proceedings of the House and they should apologise for their conduct so that their suspension could be revoked. “We also do not want bills to pass amid the din. Through the Chair I would like to request them to apologise… The entire nation has seen what has happened..They have danced on the tables, gone to beat the marshal… Tried to throw TV screens on the ground… The country has seen it all. If they continue like this, we will be left with no other option but to pass the bills in the din,” he stated. The minister further said: “If they apologise, the government is ready to take them back immediately.”

CPI-M leader Elamaram Karim, who is among the members suspended, alleged that “a distorted and perverted version” of the government and Parliamentary secretariat regarding the incident of August 11 is being run.

Twelve Opposition MPs – six from the Congress, two each from the Trinamool Congress and Shiv Sena, and one each from the CPI and CPI(M) – were suspended from Rajya Sabha last week for the entire Winter Session of Parliament for their “unruly” conduct in the previous session in August.

After Rs 133-cr Losses Due to Oppn Uproar, Passage of 8 Bills in RS Raise Productivity to 24.2% HD Devegowda likely to file nomination for Rajya Sabha election on June 9 | India News – Times of India

Will Not Collect Caste-Based Data Again, Centre Tells Rajya Sabha Amid Demand for Census
Related Topics:OppositionparliamentRajya Sabhasit-in ptotestsSuspension of MPs
Up Next