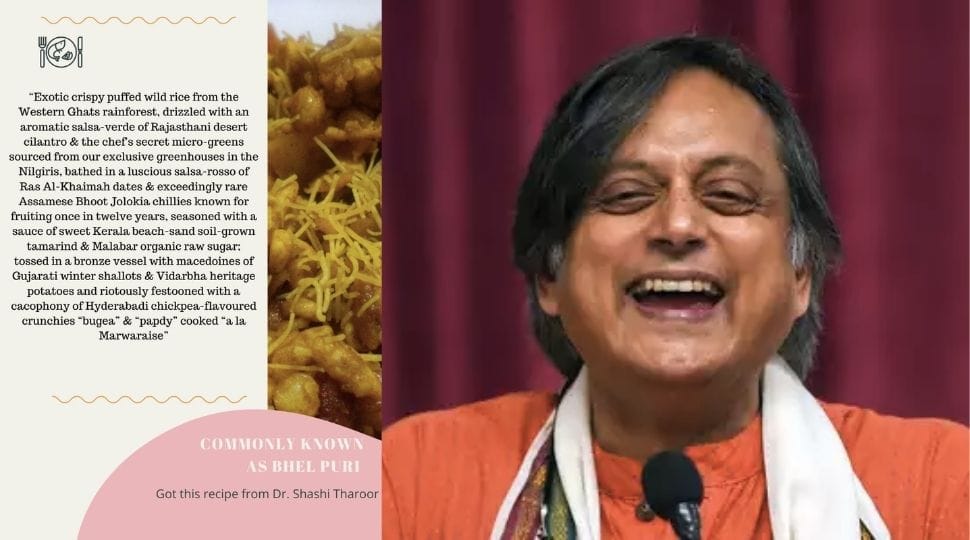 New Delhi: Thiruvananthapuram MP and Congress leader Shashi Tharoor is known for his fondness for English jargon words. He is often in limelight for the use of his English language. The Oxford University debate is one living example of it. In a recent development, Shashi Tharoor has posted an exotic description of our very own favourite Bhelpuri.

Tharoor posted the recipe of the common Indian street food on his Twitter handle. The post is amusing and has undoubtedly gone viral like any of his other tweets using his rich vocabulary skills.

Shashi Tharoor shared the photo-post Bhelpuri recipe stating that he received it on WhatsApp. The description is written by him and it is attracting a lot of users, and we are doubting that it must have been done as an intended pun for Tharoor’s penchant for multisyllabic words. He posted the recipe with the caption, “As received on @WhatsApp. Good for weekend consumption! Face with tears of joy”.

Describing the bhel used in the savoury snack as the “exotic crispy wild rice from the Western Ghats rainforest”, Shashi Tharoor’s exotic Bhelpuri recipe stated that the snack comprised of the chef’s secret micro-greens sourced from exclusive greenhouses in the Nilgiris, luscious salsa-rosso of Ras Al-Khaimah dates, and exceedingly rare Assamese Bhoot Jolokia chillies (ghost pepper). The recipe further added that the preparation can be seasoned with a sauce of sweet Kerala beach-sand soil-grown tamarind and Malabar organic raw sugar.

It further read that all these ingredients are then tossed in a bronze bowl with macedoines (usually a mixture of vegetables or fruit cut into small pieces) of Gujarati winter shallots (onion) and Vidarbha heritage potatoes and riotously festooned with a cacophony of Hyderabadi chickpea-flavored crunchies “bugea” and “papdy” cooked “a la Marwaraise”.