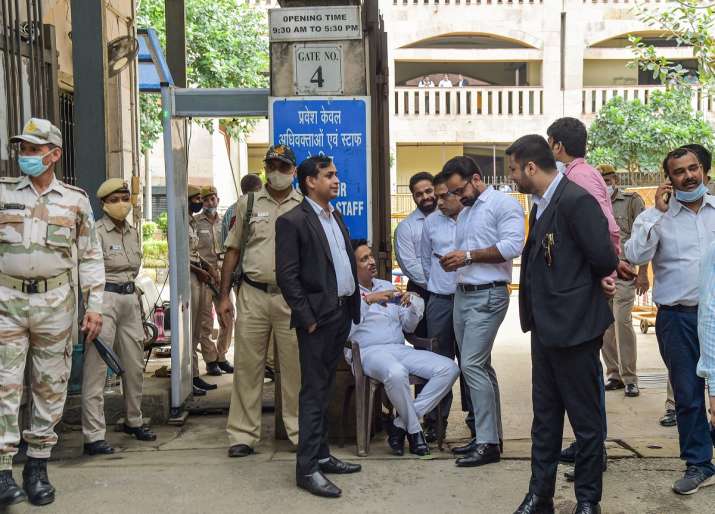 The Delhi High Court on Tuesday received suggestions from the Delhi High Court Bar Association (DHCBA) and Bar Council of Delhi (BCD) which said that the entry of advocates in court premises should be allowed based on a “smart card” having a digital chip for verification of identity. The suggestion given in view of the recent shootout that killed three people in a Rohini courtroom in Delhi was submitted to a bench headed by Chief Justice D N Patel on improving court security, and it said that such smart cards would be akin to the “proximity cards” issued to lawyers for securing entry in the Supreme Court premises.

It was also suggested that an “active interaction and meetings” of stakeholders must be ensured to deal with the issues and a separate uniform may be prescribed for law interns.

Both lawyers’ bodies opined that the production of undertrials should be through the virtual model and the number of security personnel should be increased.

Lawyer Robin Raju, appearing for a petitioner lawyer who has filed a separate plea on the issue, said that an advisory should be issued to all members of the Bar to cooperate with the security checks in courts.

The bench, also comprising Justice Jyoti Singh, was hearing a petition concerning the security and safety at court premises, which is initiated on its own following the September 24 shootout at Rohini Court.

The bench had earlier asked all stakeholders, including the Centre, Delhi government, and various bar associations to also give their suggestions on the issue so that they could be incorporated in the order.

“Advocates may be permitted with ID cards, like proximity cards in Supreme Court… There will be a mechanical scanning of these digitised cards,” said DHCBA President and senior lawyer Mohit Mathur.

Lawyer Devendra Singh, appearing for BCD, stated that a new card containing a “chip” will be issued to advocates to regulate their entry into court premises. He added that all advocates must abide by the security checks and any refusal to follow the same shall amount to misconduct.

The DHCBA further suggested that all visitors including advocates must be frisked by using advanced metal detectors, all the vehicles should be checked by employing “hi-tech devices” and entry of hawkers should be banned.

It also said that only licensed shopkeepers must be allowed access and identity cards should be issued for their staff. The BCD called for a three-tier security system, including posting police personal in civil clothes inside courtrooms, setting up a “24-hour control room” and installing more CCTVs to monitor the security at court premises.

Additional Solicitor General Chetan Sharma, appearing for Delhi Police, said that his suggestions were “more or less the same”. “It seems that the issue is only going to get worse due to overcrowding. Courts are soft targets,” he said.

“By and large we have got a good number of suggestions,” said the Chief Justice who listed the matter for further hearing on October 25.

“We expect respondents who have not filed so far the affidavit to give valuable suggestions (may do so) so that the matter is brought to an end by giving directions for safety (of court premises),” the court said.

Chase Celebs Who Recovered from Covid-19 to Donate Plasma and Encourage Others: HC to Delhi Govt

Central Vista not a vanity project, but necessity: Hardeep Puri hits out at former bureaucrats