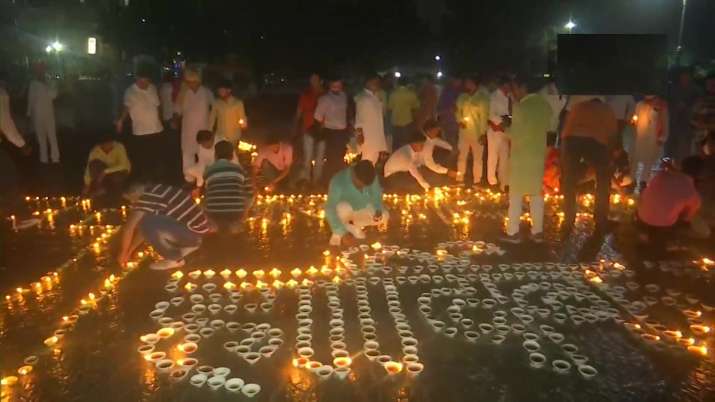 Bharat Mata Mandir in Varanasi was illuminated with 71,000 earthen lamps and a 71-kg laddu was cut by Bharatiya Janata Party (BJP) workers to celebrate PM Modi’s birthday, which were distributed in each of the eight assembly constituencies of Varanasi

Along with lighting diyas, a series of other events was also organised in Varanasi during the day to mark PM’s birthday.

For instance, amid the chanting of Vedic Mantras, Uttar Pradesh religious affairs minister Neelkanth Tiwari, along with 71 batuks (religious scholars), offered milk and kesar to the Ganga at Ahilyabai Ghat. Also, a 71-metre-long chunari (scarf) was also offered to the Ganga at the iconic Dashashwamedh Ghat.

Special prayers were offered at the Kashi Vishwanath ( KV) temple at noon and also Rudrahavan was done on the occasion of PM’s 71st birthday.

The rituals of panchamrit abhishek and jalabhishek (bathing the deity with Ganga water) were also conducted.

Born in Gujarat in 1950, Modi joined the Rashtriya Swayamsevak Sangh (RSS) at an early age and was later drafted into the BJP.

Made Gujarat chief minister in 2001, Modi has never suffered an electoral setback when votes were cast on his leadership, leading the BJP to power in the state for three consecutive terms and then at the Centre back to back in 2014 and 2019.

ALSO READ: ​PM Modi thanks several world leaders for their greetings on his 71st birthday