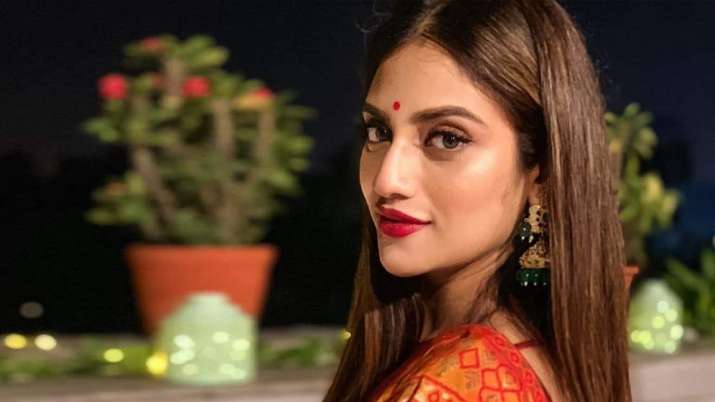 Bharatiya Janata Party (BJP) MP Sanghmitra Maurya has described TMC MP Nusrat Jahan’s membership of the House as “non-est”. In a letter addressed to Lok Sabha Speaker Om Birla, Maura referred to Jahan’s ‘contradictory’ remarks concerning her marital status to demand that the matter be referred to the Ethics Committee for a detailed “investigation for her illegal and ethical conduct”.

The Badaun MP said that appropriate action should be taken against the actor-turned-politician. Jahan is a Lok Sabha MP from West Bengal’s Basirhat.

“An appropriate action be intimated under relevant rules of Lok Sabha procedure and/ or the matter be referred to Committee on Ethics for detailed investigation for her illegal and ethical conduct,” Maurya said in the letter.

She also attached the Lok Sabha profile of Jahan where she has mentioned her husband’s name as Nikhil Jain.

“Her media statement regarding her marital status controvert her oath for Lok Sabha membership wherein she took oath as Nusrat Jahan Ruhi Jain. This effectively renders her membership as non-east in law,” the letter added.

Maurya, however, later told ANI that Jahan is entitled to her personal life and nobody should encroach upon it but her statements about her marriage means “she deliberately provided false information in Parliament”.

“She deliberately provided false information to the Lok Sabha Secretariat thereby indulging in unethical, illegal and immoral conduct. She cheated her electorate by giving false information and this brings a bad name to Parliament and its members,” she said.

Jahan, who is reportedly dating actor-politician Yash Dasgupta in recent times, had earlier argued that since her marriage ceremony with businessman Nikhil Jain in 2019 had taken place in accordance with Turkish Marriage Regulation, the marriage is invalid in India.

According to Jain, Jahan had avoided always his requests to get the marriage registered. He claimed that Jahan’s behaviour started changing towards him in August 2020 when she was shooting a film, and she left his home bag and baggage in November.

READ MORE: Nusrat Jahan shares pictures with her baby bump on Instagram. Look at that glow!

India to give befitting reply if anyone casts evil eye: Prasad | India News – Times of India

None from TMC keeps relation with me, says Suvendu Adhikari’s father