Its a baby! Toddlers reaction to her newborn brother leaves netizens in splits- Watch viral video 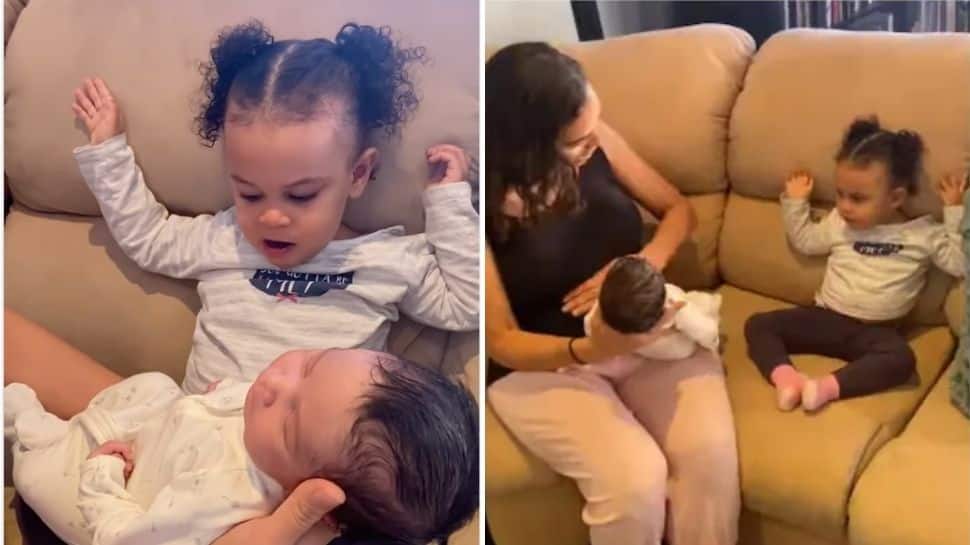 New Delhi: Kids are the most honest beings on the planet. Their innocence and unfiltered reactions are not only adorable but to die for. This very element of their existence makes them extremely unpredictable and at moments even hilarious.

A video of one such kid had gobe viral on the internet. The video starts with the mother holding a baby in her arms and asking toddler to say ‘hello’. The little girl’s reaction on seeing the baby is hilarious and has gone viral on social media.

In the video, the mother can be seen trying to familiarise her daughter with the new addition in the family, her brother, while the father is behind the lens. The little girl can be seen sitting casually on the couch at the start, but as soon as she sees the baby she goes into a defensive mode.

The mother also laid the baby down on the daughter’s lap but the toddler continued to eating her candy with weird face expressions.

The video was uploaded on Instagram by Bviral. Till now it has garnered over 6.9 lakh views and thousands of comments. Netizens were in splits after watching the young girl’s reaction.

‘On top of the world’ literally! Woman stands on tip of Burj Khalifa in Emirates ad, check out BTS

Air India aircraft gets stuck under bridge, here’s truth behind the viral video

The Name Has Changed, This Nandigram is Now ‘Mamatamoyee Nagar’

Delhi: Over 150-year-old Ramlila will not take place this year