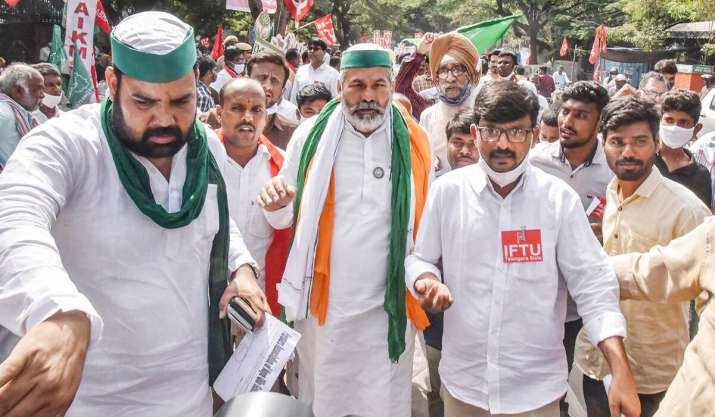 As the protest against the Centre’s farm laws at the Delhi borders completes one year on Friday, more farmers from Haryana and Punjab headed to the Singhu and Tikri borders of the national capital.

BKU (Rajewal) leader Pargat Singh told reporters at the Tikri border on Thursday that thousands of farmers have reached and many more are reaching.

“We will proceed as per what the Samyukt Kisan Morcha (SKM) decides,” he said when asked about be their future course of action.

Terming the Union Cabinet’s approval of a bill repealing the farm laws on Wednesday a mere “formality”, farmer leaders said now they want the government to resolve their other pending demands, most importantly the legal guarantee for the minimum support price (MSP).

However, they welcomed the move and said this is only the first victory for the protesting farmers and they will continue their ongoing agitation.

The Farm Laws Repeal Bill, 2021, approved days after Prime Minister Narendra Modi’s announcement to repeal the three central farm laws, will now be introduced in the Lok Sabha for passage in the winter session of Parliament beginning November 29.

The Samyukt Kisan Morcha, an umbrella body of various farm unions spearheading the ongoing stir, on Thursday said that the farmers’ movement, which began on November 26 last year, will complete one year of its “historic struggle tomorrow”.

“On the call of the Samyukta Kisan Morcha, to mark one year of the historic farm movement with massive protests at Delhi morchas and the capitals and district headquarters of distant states, farmers and workers are responding in huge numbers. Thousands of farmers have started arriving at the various morchas in Delhi,” an SKM statement said.

“The fact that such a long struggle has to continue is a clear reflection on the insensitivity and arrogance of the Union government towards its toiling citizens,” it said.

“Over the course of 12 months of one of the largest and longest protest movements across the world and in history, crores of people took part in the movement which spread to every state, every district and every village of India,” the SKM said.

Apart from the government’s decision and Cabinet ratification of repeal of the three “anti-farm laws, the movement achieved several victories for farmers, common citizens and the nation at large,” it said.

The SKM said the movement created a sense of unified identity for farmers, cutting across regional, religious or caste divisions.

“Farmers are discovering a newfound sense of dignity and pride in their identity as farmers and their assertion as citizens. It has deepened the roots of democracy and secularism in India,” it said.

A meeting of the SKM will be held on November 27 at the Singhu border. In the meeting, the farm unions will take a decision regarding the further course of action, the statement said.

‘Rehearsal’ for Jan 26 ‘Kisan Parade’, Farmers’ Tractor March in Delhi Before 8th Round of Talks with Centre

Rakesh Tikait made statement in haste, should have spoken to us: BKU spokesperson Darshan Pal

One year of farmers’ protest: Rakesh Tikait urges farmers to prepare for the long haul

“This ‘unbridled bull’ helps BJP most, don’t let him out of Hyderabad”: Tikait takes a dig at Owaisi