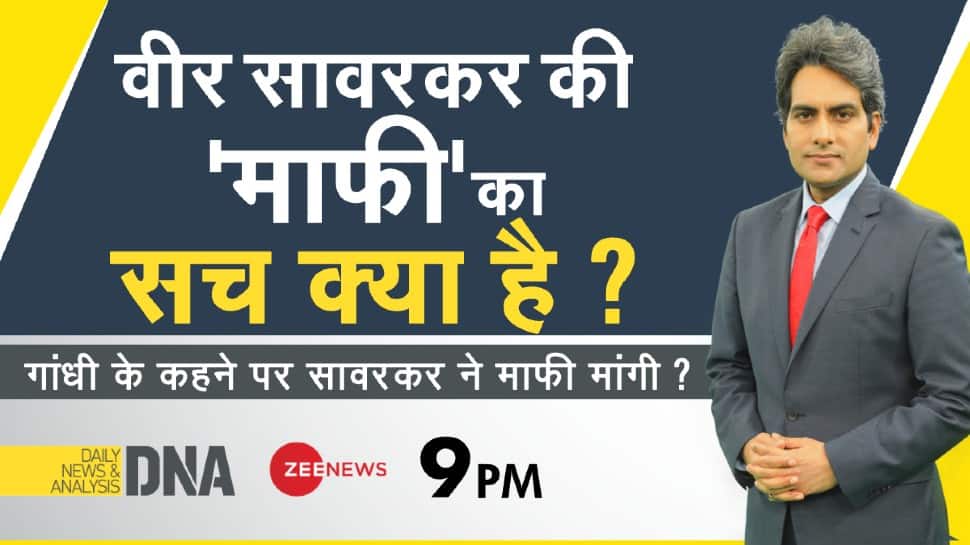 New Delhi: A controversy erupted today when Union Defence Minister Rajnath Singh at a book launch event said that it was Mahatma Gandhi who had advised Veer Savarkar to apologise to the British government. There are some people who are bent on proving freedom fighter Veer Savarkar a coward. Naturally, the minister’s statement did not sit well with these people.

Zee News Editor-in-Chief Sudhir Chaudhary on Wednesday (October 13) discussed the truth behind Savarkar’s mercy petitions that he wrote to the British government while he served the ‘Kala Pani’ sentence.

There are some people who dislike Savarkar and do not want to acknowledge his friendship with Gandhi. They should know that Gandhi wrote an article supporting Savarkar and also appealed to the British for his release.

Veer Savarkar sent a total of 6 mercy petitions to the British government during the punishment of ‘Kala Pani’ out of which five petitions were sent between 1911 and 1919, while one petition was sent in 1920 on the suggestion of Mahatma Gandhi. But some people are arguing that when Mahatma Gandhi came to India from South Africa in the year 1915, how he advised Veer Savarkar to apologise.

Veer Savarkar was first arrested in London in 1909. One of the charges on Savarkar was the abetment to murder of Nashik Collector Jackson. He was also accused of trying to create a war-like situation by instigating a rebellion against the British government. This proves that the British government at that time considered him to be his biggest enemy and he was one of the biggest revolutionaries of India.

After his arrest, he was sent to the Cellular Jail in Andaman and Nicobar Islands in the year 1911, which was then also known as Kala Pani Jail. During this sentence, Veer Savarkar was subjected to terrible torture, after which he wrote the first letter to the British government on 30th August 1911 and pleaded the British to waive his sentence. But after 3 days, his petition was rejected.

After this, on 14th November 1913, he filed another petition in which he assured not to rebel against the British government. However, there is a difference of opinion among historians about whether this letter should be considered only an apology or a war strategy because Savarkar knew that revolution cannot be brought by being imprisoned in jail and that it was important for him to get out.

In 1919, after the first World War, King George V of Britain issued an order, under which all political prisoners in prisons were pardoned. This was a gift to the people of India because during the war many leaders, including Mahatma Gandhi, had taken an oath of allegiance to the British.

Under this order, many prisoners were also released from the Cellular Jail in Andaman, but the British government did not pardon Vinayak Savarkar and his elder brother Ganesh Damodar Savarkar.

After this Savarkar’s younger brother Narayan Rao Savarkar wrote a letter to Mahatma Gandhi on 18 January 1920, which was cited by Vikram Sampath in his book titled ‘Savarkar: Echoes from a Forgotten Past’.

He asked Gandhi’s advice and help in that situation. He wrote that Savarkar had been serving the sentence for almost 10 years and that his health had suffered a lot and his weight has come down to 45 kg.

A week later, Mahatma Gandhi replied to this letter on 25 January 1920. He writes, “I have received your letter. It is difficult to give any advice in this matter. But I will give you a suggestion that you should prepare a detailed petition to prove Vinayak Savarkar to be a political prisoner.” Gandhi said that this could generate public support.

It was only after Mahatma Gandhi’s suggestion that Veer Savarkar sent his sixth and last mercy petition to the British government, which was later rejected like the rest of the petitions.

Gandhi had also written an article in Young India newspaper on 26 May 2020, titled “Savarkar Brothers” calling for his release.

Veer Savarkar remained in jail for a total of 15 years, out of which he spent 10 years in Kala Pani, which was considered the most dreadful prison. Apart from this, he was also under house arrest for 13 years in Ratnagiri district of Maharashtra.

A freedom fighter who spent almost 28 years of his life in such terrible situation for the freedom of the country – Can his patriotism be doubted? But there are some people in the country who are used to playing politics over it.

DNA Exclusive: Violence on the streets of London after defeat in Euro Cup final exposes the ‘English civility’

DNA Exclusive: The US troops withdrawal, Taliban takeover, and beginning of Jihad 2.0?

DNA Exclusive: Targeted killings of Hindus and Sikhs in Jammu and Kashmir on the rise again
Related Topics:DNADNA ExclusiveMahatma GandhiVeer Savarkar
Up Next