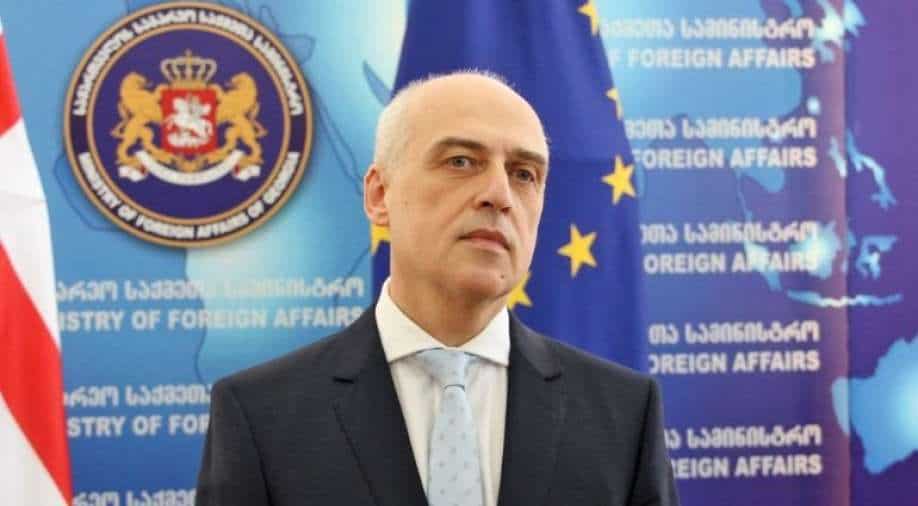 Georgia’s Vice Prime Minister and foreign minister David Zalkaliani has expressed confidence on signing a free trade agreement with India which he said will “greatly contribute to the further development of our economic cooperation”.

The Georgian embassy is currently coordinating for the first round of online negotiations between the Indian commerce ministry and the Ministry of Economy and Sustainable Development of Georgia.

Speaking exclusively to WION’s Sidhant Sibal, Zalkaliani pitched for connectivity between the two countries saying, “(I) would like to underline also the importance of implementing multi-modal connectivity projects and exploiting the transit and transport potential of Georgia. In this regard, I mean the location of Georgia. Let me stress the importance of developing the south–west corridor project, primarily in the context of India.”

In July, India’s external affairs minister Dr Jaishankar had visited Georgia, the first such visit from the Indian side since the independence of the country in the 1990s.

During the visit, EAM handed over part of the relics of St. Queen Ketevan to government. St. Ketevan was a 17th century Georgian Queen martyred in Iran’s Shiraz with her remains brought to Goa by the Portuguese in 1627. On that development, Zalkaliani said, “The Georgian people have been waiting for this day for a long time and I am really delighted to note that the above gesture of goodwill from the Indian government is a result of our mutual commitment and spirit of strong cooperation.”

WION: How do you see India-Georgia ties panning out in future?

David Zalkaliani: India and Georgia enjoy centuries-old friendly relationship. I am quite sure that despite the geographic distance between Georgia and India, we can do much more and share a lot together, making the interaction even more result-oriented. Our countries could give one of the best examples in this regard. I think that the development of bilateral trade and economic cooperation should be a top priority in the agenda of our bilateral relations. Unfortunately, the low numbers in the bilateral trade turnover between India and Georgia do not really reflect the existing high potential for the development of trade relations. Along with dynamically developing political relations, quite a solid legal base was laid for the development of bilateral trade and economic relations as well. Several memorandums of understanding were signed in recent years between the various trade communities of Georgia and India. So, with joint efforts, all this should be materialised and become much more result oriented in the near future.

I am confident that the signing of the Free Trade Agreement between Georgia and India will greatly contribute to the further development of our economic cooperation. The embassy is closely cooperating and coordinating with the Ministry of Commerce and Industry of the Republic of India, as well as with the Ministry of Economy and Sustainable Development of Georgia in order to plan the first round of online negotiations in the near future. We would welcome more direct investments from India to Georgia, as well as the establishment of joint ventures. In the recent years, important direct investments were made from India, mainly in the energy sector. At the same time, we are also eager to promote the exports of Georgian products to the Indian market, especially the agricultural products and the Georgian wine.

I would also like to underline the importance of implementing multi-modal connectivity projects and exploiting the transit and transport potential of Georgia. In this regard, I mean the location of Georgia. Let me stress the importance of developing the south–west corridor project, primarily in the context of India. The main role of the south–west corridor is the realisation of goods transportation between EU countries and India. I believe that in the context of raising the connectivity, the establishment of fruitful cooperation between the Georgian and Indian ports will be also extremely important.

WION: How will EAM Jaishankar’s visit consolidate the ties?

David Zalkaliani: The first ever historical visit of the Indian Minister of Foreign Affairs to Georgia held on July 9-10, 2021 is a clear proof of dynamically developing bilateral relationship and friendship between our two countries and nations. The visit can be considered extremely important in terms of further strengthening our political and economic relations as well as cultural ties and people-to-people exchanges. Dr S. Jaishankar, besides meeting with me, also held high-level meetings with the top officials of the Georgian government and Parliament, namely, with the President of Georgia, H.E. Ms Salome Zourabichvili, with the Prime Minister of Georgia, H.E. Mr Irakli Garibashvili and with the Minister of Economy and Sustainable Development of Georgia, Ms Natia Turnava. I am confident that the institutional meetings held in the framework of the visit will give additional impetus to the future development of our bilateral cooperation in different fields and sectors. I also hope that the visit of the Indian Minister of Foreign Affairs will accelerate the establishment of the Indian Embassy in Georgia.

WION: What were the ongoing conversations between you and your Indian counterpart?

David Zalkaliani: We discussed a very wide range of issues in the agenda of our bilateral and multilateral relations and noted with satisfaction the increasing dynamics of our bilateral relations in different fields, including the political, economic, cultural, educational and legal areas. Me and my Indian colleague highly appraised ongoing cooperation in the sectors of transport, investments, tourism, agriculture, technologies, communications and innovations. We also discussed the prospects for further enhancing these relations, especially in the fields of trade and economy.

During the meeting, I expressed my sincere gratitude for India’s firm and unwavering support for Georgia’s sovereignty and territorial integrity. Obviously, during the meeting I thanked the Indian government and the Prime Minister, Narendra Modi, as well as all representatives of the Indian side, including the Ministry of External Affairs, the Ministry of Culture and the Indian Archaeological Agency, who, through close coordination with the Georgian Embassy in India, were involved in returning the one part of holy relics of St. Queen Ketevan to the Georgian nation.

We also exchanged our views on the current and important regional and global developments. We are attentively watching the latest developments in the region of South Asia, especially with regard to Afghanistan. Being a reliable and responsible member of the international community, also recognising the rapidly deteriorating environment in Afghanistan and anticipating the needs of our many partners in NATO and Europe, Georgia initiated an interagency task force responsible for supporting the transit operation with all necessary measures. Working with other NATO member states, we rapidly transformed part of the facilities at Tbilisi International Airport to process, feed, service, provide sanitary facilities and medical treatment and care for evacuees from Afghanistan.

A Georgian military base adjacent to the Tbilisi International Airport immediately became committed to the humanitarian care efforts by erecting enormous, multi-purpose tents to host, feed and accommodate evacuees on an emergency basis.  Evacuees were provided with the temporary accommodations on the territory of Georgia. In the maelstrom of the mass evacuation from Kabul Airport, Georgia undertook more than 20 return flights between Tbilisi and Kabul, facilitating the evacuation of more than 2,500 people. During these flights Georgia’s airspace and its territory were used as a transit route from Afghanistan. Our country became an important regional hub and focal point for the evacuation of many nationals representing different countries. The efforts of the Georgian government were highly appreciated by our friends and international partners, including USA, Norway, Finland, EU, NATO and other countries or international organisations.

WION: EAM gave the relics of Holy Relic of St. Queen Ketevan. How do you see the development? This has been a long-standing request of Georgia.

David Zalkaliani: Yes, indeed, the visit was marked by a very important cultural event which has highest spiritual significance for the Georgians, namely, a part of the holy relics of the Great-Martyr St. Ketevan, Queen of Georgia was handled to Georgia and to the Georgian nation on the permanent basis and for free. I would like to extend my special gratitude to my Indian colleague, Minister of External Affairs, Dr. S. Jaishankar for this valuable gesture to bring the holy relics to Georgia. The Georgian people have been waiting for this day for a long time and I am really delighted to note that the above gesture of goodwill from the Indian government is a result of our mutual commitment and spirit of strong cooperation. Georgia and India have strong historical ties dating back to ancient times. The discovery and subsequent return to Georgia exemplify yet another powerful basis of the unbreakable bond of friendship between our countries and people.

It is worth mentioning that the entire process, from the search and excavation to the authentication of the Relics, was time-consuming and took enormous efforts and hard work on the part of India and Georgia alike. We want to express utmost appreciation to those in India who were involved in the process and made an invaluable contribution to this historic event. We will always remember this kind and generous gesture from the Indian side, the unprecedented decision taken by the Prime Minister of India, Shri Narendra Modi. In the framework of the visit, the Minister S. Jaishankar attended the official ceremony of handling the part of the Holy Relics to the Georgian Orthodox Church that was held at the Sameba “Trinity” Cathedral.

WION: Can we expect a high level visit from Georgia anytime soon?

David Zalkaliani: We attach high importance to further exchanging bilateral visits between Georgia and India. Hopefully, with the consideration of the global pandemic situation, we will be able to schedule a high level visit from Georgia to India in the near future.

WION: What kind of practical cooperation is expected between the two sides?

David Zalkaliani: Our countries enjoy very fruitful cooperation in different fields but obviously there is a big potential for expanding more practical cooperation. We see a lot of potential in boosting mutually fruitful cooperation in the fields of innovations and informational technologies, defense and security, agriculture, healthcare, education, science etc. Deepening of cultural ties and people-to-people exchanges as well as development of tourism between our countries is also extremely important. Our embassy in New Delhi is actively working with the Indian side in order to launch the direct commercial flights between Georgia and India. The launch of the direct flights will further facilitate the development of people-to-people contacts, tourism, educational and cinematographic cooperation and will help us achieve the higher level of trade-economic cooperation as well.

We attach high importance to the further development of cultural relations between Georgia and India. In this regard, it is important to mention that with the efforts of the Georgian embassy and thanks to the perfect cooperation with the relevant Indian institutions. In 2020, the first ever Hindi translation of the epic Georgian poem “The Knight in the Panther’s Skin” was published in India. This is an extremely important and noteworthy event since it identifies those historical and cultural-economic ties which existed as bridges for centuries between our civilisations. This story is a typical Indian narrative and one of its archetypes can be found in the ancient Indian epic “Ramayana”, love story of Rama and Sita. Our embassy is also planning to foster the translation of the Georgian poem in other languages of India.