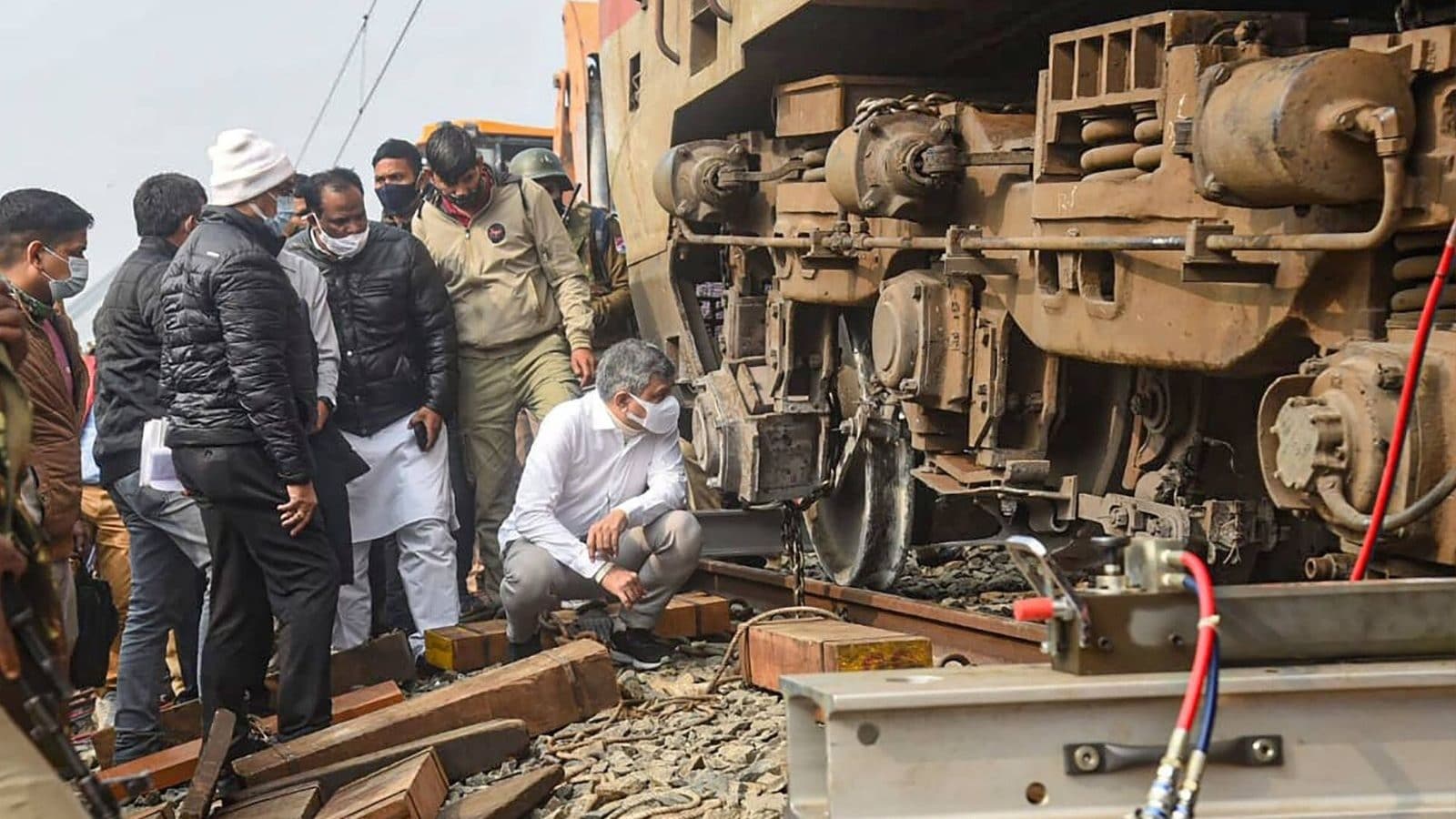 Railway Minister Ashwini Vaishnaw on Friday visited West Bengal’s Jalpaiguri district, where the Bikaner-Guwahati Express met with an accident a day ago, and said that preliminary reports suggested there was ”some issue” with the equipment of the locomotive.

At least nine people were killed and 36 injured after 12 coaches of the express train went off the rails on Thursday, some of which overturned or were found mounted on top of another, near Domohani in Alipurduar subdivision of Northeast Frontier Railway (NFR).

Vaishnaw said that the actual reason behind the accident would be ascertained only after dismantling the engine’s equipment. The minister also paid a visit to injured passengers at the hospital.

”Preliminary findings suggest there was some issue with the locomotive’s equipment, not with speed restrictions or tracks. What was the issue will be found out only after dismantling the equipment. There will be marks on the equipment. Only after studying those marks, the reason behind the accident can be ascertained,” he told reporters after inspecting the accident site.

An inquiry into the unfortunate incident is underway, he said. ”The root cause (behind the accident) will soon come out. The Commission of Railway Safety is conducting an inquiry. We pray for the departed souls and wish for a speedy recovery of those injured. Talks are on with the families regarding the distribution of ex-gratia,” he added.

Later, after meeting the injured at the hospital, the Union minister said Prime Minister Narendra Modi was continuously monitoring the situation. ”I am in constant touch with the PM and regularly briefing him about the situation,” he stated.

Earlier in the day, Guneet Kaur, the NFR Chief Public Relations Officer, said in Guwahati that Vaishnaw arrived at Domohani railway station at 9.38 am and immediately proceeded to the site of the accident on a motor trolley. ”The minister inspected the site to ascertain the condition of the track and fittings. He also checked the underframe of the locomotive and its braking system,” she said.

She confirmed that the death toll has risen to nine, with three of the deceased yet to be identified, and the number of injured stood at 36. While 23 passengers are undergoing treatment at a super speciality hospital in Jalpaiguri, six have been admitted to the North Bengal Medical College and seven at Maynaguri Rural Hospital, the CPRO said.

”An inquiry committee has been formed to find out what caused the derailment,” Kaur told PTI. She also said that ex-gratia to the injured has been paid within hours of the accident.

The Railways has announced ex-gratia of Rs 5 lakh for the next of kin of those killed in the accident, Rs 1 lakh for the grievously injured, and Rs 25,000 for passengers with simple injury. Kaur said authorities were trying to get in touch with the family members of the deceased for disbursement of the compensation.

The NFR official also said that evacuation of people from the mangled coaches was completed on Thursday night and a special train had left the accident site for Guwahati at 9.50 pm with 290 passengers on board. The train reached Guwahati railway station at 7.55 am on Friday and arrangements for food were made for the passengers, Kaur stated.

There were 1,053 passengers onboard the express train at the time of the derailment. NFR General Manager Anshul Gupta, who reached the site of derailment at 12.08 am on Friday, is currently supervising the restoration work of tracks for resuming normal train movement. He visited various hospitals on Thursday night and early on Friday to check the condition of the injured patients, Kaur said.

”Restoration work is being undertaken on war footing under the supervision of the general manager. Some of the derailed coaches have already been re-railed,” she explained. At least 10 trains, mostly intercity and DEMU trains, have been cancelled on the affected route on Friday, while a couple were short-terminated or short-originated. Another 10 long-distance trains were diverted through alternative routes, the CPRO added.

Meanwhile, Congress leader in Lok Sabha, Adhir Ranjan Chowdhury, said the accident was a result ”of poor maintenance” of tracks and locomotives as the BJP government was more interested in privatising the railways. ”The Centre is least bothered about providing proper passenger services. It is due to the poor maintenance of tracks and locomotives that such accidents taking place. The BJP is only interested in privatising the railways,” Chowdhury, who was MoS Railways during the UPA-II regime, said.

In photos: Bikaner-Guwahati Express derails in Bengal | The Times of India
Related Topics:bikaner-guwahati expressjalpaiguri
Up Next