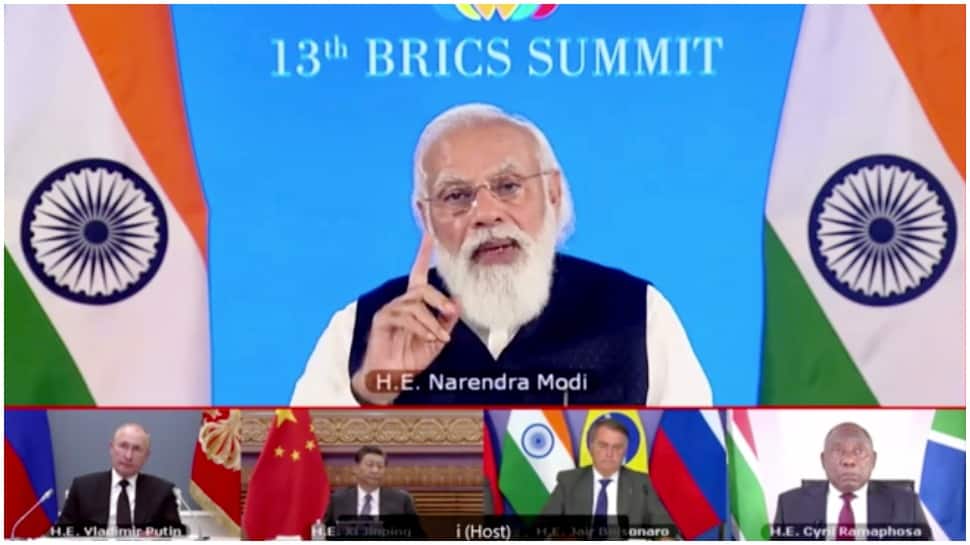 The five-nation grouping, BRICS (Brazil-Russia-India-China-South Africa), has strongly called for preventing attempts by various terror groups to use the territory of Afghanistan to carry out attacks against other countries.

Here are other takeaways from the Thursday BRICS meeting:

1. It pitched for an inclusive intra-Afghan dialogue to ensure peace and stability in that country. At an India-hosted virtual summit chaired by Prime Minister Narendra Modi, the top leaders of the BRICS leaders emphasised the need to address the humanitarian situation in Afghanistan and uphold human rights, including those of women, children and minorities.

2. The grouping said it is committed to combating terrorism in all its forms and manifestations, including the cross-border movement of terrorists, and terrorism financing networks and safe havens.

3. The grouping didn’t name any country, but said that they reject the “double standards” in countering terrorism and extremism conducive to terrorism.

4. Russian President Vladimir Putin flagged concerns over terrorism flowing out of Afghanistan and criticised the US, saying the current round of the crisis in the country is a direct consequence of “irresponsible attempts” to impose “alien values”.

He said Russia is not interested in Afghanistan remaining a “threat to the surrounding countries so that terrorism and illegal drug trafficking threaten us from Afghan territory.”

6. In the declaration, the BRICS talked about the collective responsibility in combating COVID-19 and noted that the cooperation on the study of origins of coronavirus (SARS-COV-2) is an important aspect of the fight against the pandemic.

7. The BRICS declaration said the leaders condemned in the strongest terms the recent terrorist attacks near the Kabul airport and called for refraining from violence and settling the situation by peaceful means.

8. The leaders emphasised on the need to address the humanitarian situation and to uphold human rights, including those of women, children and minorities.

9. In his opening remarks, Modi mentioned the grouping adopting the ‘BRICS counter-terrorism action plan’ and listed various achievements including under India’s tenure as its chair.

10. The BRICS counter-terrorism strategy is aimed at strengthening existing bilateral and multilateral ties within the grouping and making a meaningful contribution to the global efforts of preventing and combating the threat of terrorism.

11. The BRICS also rejected “double standards” in countering terrorism and called for expeditious finalisation and adoption of the Comprehensive Convention on International Terrorism within the UN framework.

12. China will take over as the chair of BRICS and host the 14th BRICS summit next year.

Afghan crisis to shadow BRICS summit chaired by India on Thursday
Related Topics:AfghanistanBRICSChinaIndiaNarendra Modi
Up Next

Bolsonaro offers Olive branch in his feud with Supreme Court